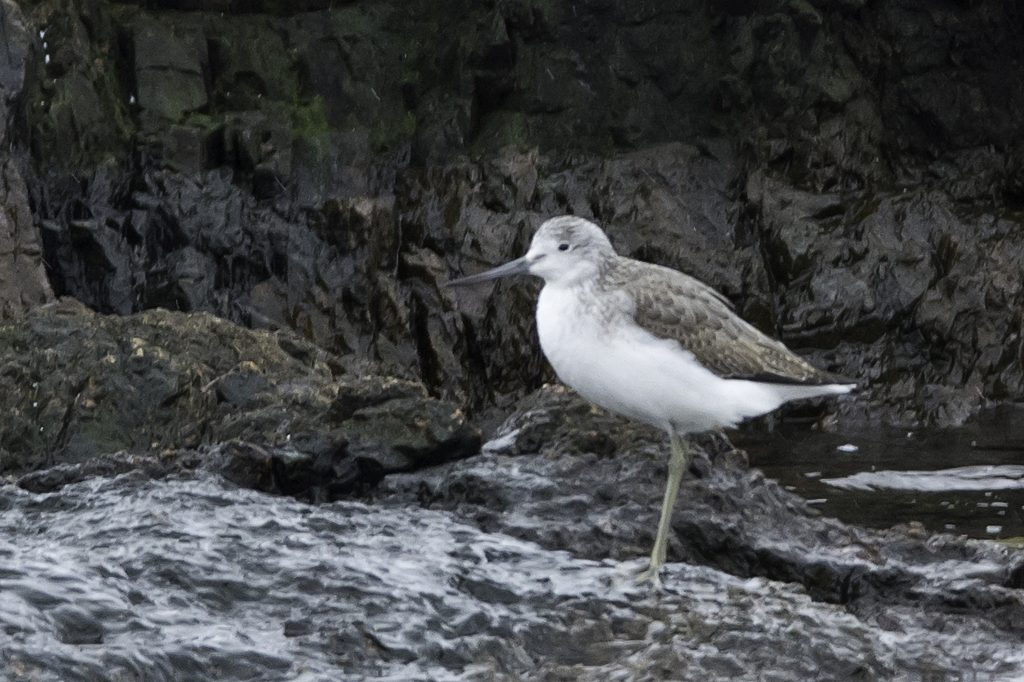 Tim Spahr and Brian Harris unearthed a photograph from the depths of the internet labeled as a Greater Yellowlegs, taken in Gloucester on December 8, 2014. The photographer confirmed the date and location of the photograph, which was also supported by metadata. The photograph indeed was a Tringa shorebird, but had dull yellow-green legs instead of bright yellow legs, a mostly white face with a large white gap between the bill and the dark coloration on the forehead, and uniform scapular feathers. The identification was clearly Common Greenshank. This record is not only a first for Massachusetts, but represents one of very few records in eastern North America. Coincidentally, only two weeks after this post hoc discovery, a Common Greenshank was found in New Jersey in late October 2017. 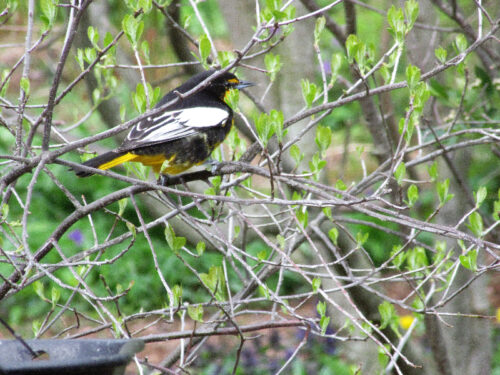 On May 7–8, 2017, a homeowner in Sutton noticed a bright orange oriole at their feeders that was not a Baltimore. They circulated photographs to some local birders, who were astonished to see it was a Black-backed Oriole, an endemic species of central Mexico! Not only that, but certain unique facial markings are identical to that of an individual that visited some feeders at Sinking Spring, PA in January-April 2017.

It is a near certainty these two sightings are of the same individual. The committee unanimously rejected this record on the first round on the grounds of provenance. Black-backed Oriole is an altitudinal local migrant, and has not been shown to occur naturally outside of Mexico. In addition, the species is found in the caged bird trade to at least some capacity. The committee was not convinced that a wild origin was significantly more likely than a captive origin, so it decided to be cautious.

This report treats records of two rare northern owls that both were identified originally as their southern congeners. During the Super Bowl of Birding XIV hosted by Mass Audubon, a small roosting owl was photographed and identified as a Northern Saw-Whet Owl. The photos, however, later revealed a Boreal Owl. Despite extensive searching, the owl was never relocated after the initial observation. In the Nungee Swamp in Hampshire County, a foraging owl in an open field was photographed and identified as a Barred Owl on eBird. Weeks after the fact, Brian Rusnica came across the eBird report of a Barred Owl and alerted the birding community to the apparent presence of a Great Gray Owl. Once again however, this owl was never refound.

Other highlights in the report include a Magnificent Frigatebird that was photographed during a whale watch at Stellwagen Bank in June 2017; eight Ross’s Goose reports; four Mew Gull reports; and seven Painted Bunting reports. Ross’s Geese clearly have exploded into the Northeast, with at least 19 total records in the past 10 years in Massachusetts alone, and only three scattered records prior to that.

In this truncated report, we present basic statistics for each record of each species or taxon covered: the record number, count of individuals, where and when the bird was seen, and who submitted evidence. We also indicate if the evidence provided was photographic (ph), video (v), audio (au), or a written submission (†). As always, the committee strongly encourages written submissions even where photographs exist.

When known, we try to credit the discoverer with an asterisk (*), especially if he or she has supplied evidence. The statistics in brackets for each species or taxon show the number of individual birds accepted through records in this report, followed by the total number of MARC-accepted individual records for that species.

Amazingly, a Brown Booby was perched on the guard rail of a bridge under construction in Ludlow. A passerby photographed and posted it to a local bird photography Facebook group, where it quickly gained attention. 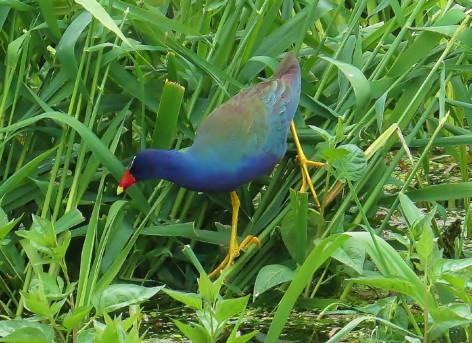 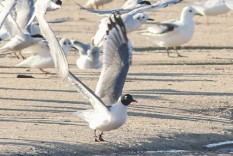 How many Franklin’s Gulls were present at Race Point in June 2017? Apparently no fewer than four, as is evident by varying molts of well-photographed birds. Historically, June has not been a month typically associated with Franklin’s Gull records in Massachusetts. 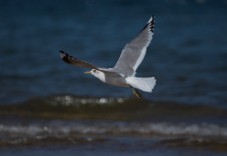 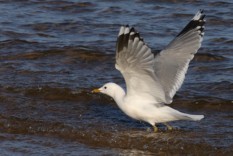 Will Sweet was birding independent of Alan Kneidel and Nathan Marchessault and both parties reported a Mew Gull. Of course, the logical conclusion would have been that the same bird had been sighted twice. However, photographs revealed two completely different individuals, one a clean, breeding-plumaged “European” Mew Gull and a streaky-headed “Kamchatka” Mew Gull!

Chatham seems to be a mecca for rare doves of Massachusetts. 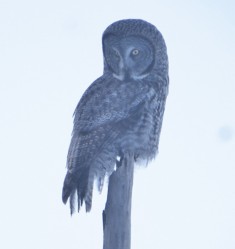 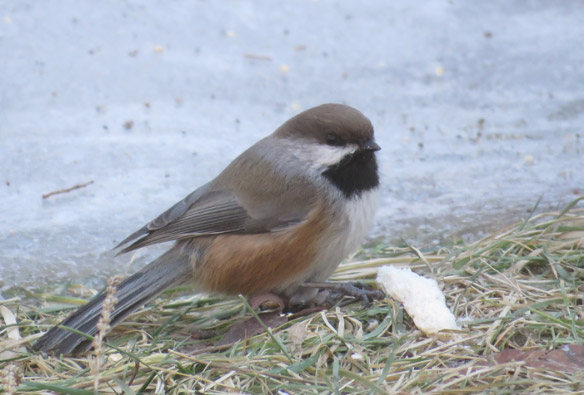 Boreal Chickadee (Poecile hudsonicus) [Added to review list 2017; one record since then]

This species has become very scarce in Massachusetts, with only a couple records in the past 10 years. The previous record was a bird that stayed for a few days in Squantum in November 2010.

A Smith’s Longspur was present at Bear Creek Sanctuary for the second year in a row. It is entirely up to speculation as to whether there are one or two individuals involved. The first record occurred 12/21/2015 to 1/20/2016. 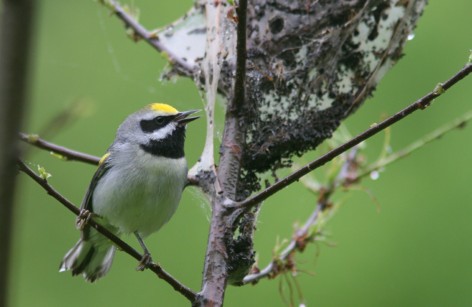 Golden-winged Warbler (Vermivora chrysoptera) [Added to review list 2017; one record since then]

2017-016: 1 at Salisbury Beach, Salisbury, Essex, 6/13/2017. This report potentially could have pertained to the same individual as 2017-015, although the members felt that the photograph was inconclusive and the description was too brief to rule out other frigatebird species, and potentially other seabirds.

It is difficult yet critical to evaluate certain features on Streptopelia doves, which include the color of the back and primaries, the color of the undertail coverts, and if the black coloration on other outer vane of the outer rectrix extends more posteriorly than the black coloration on the inner vane. These features are necessary to rule other the similar Streptopelia doves and their intergrades, which are common pets in the caged bird trade. Unfortunately, this report did not include those details and, therefore the committee determined that the supporting documentation for this identification was inconclusive.

Certainly an intriguing report of an incredibly difficult identification. This record was supported by a description, photographs, and an audio recording. This report received support from a couple members who felt that the reddish tones of the bird coupled with the final phrase of the song being up-slurred was sufficient for acceptance. However, most members were not convinced that the photos and description of the physical appearance ruled out Gray-cheeked, although some members commented that separation of Gray-cheeked and Bicknell’s Thrushes by physical appearance alone in the field may be impossible. The audio recording and description was the more critical part of this record. The songs of Gray-cheeked and Bicknell’s Thrushes are distinct, with the final part of the song being typically down-slurred in Gray-cheeked and up-slurred in Bicknell’s. The Bicknell’s overall has a higher-pitched song than Gray-cheeked. Again, a couple members felt that they indeed could hear the final part of the song and that it corresponded to a typical Bicknell’s. The other members, however, felt that the audio was not clear enough to be certain they were hearing the correct song, let alone the correct parts of the song. In addition, Gray- cheeked Thrushes can give isolated songs that contain an up-slurred final note similar to a Bicknell’s. Therefore, for Bicknell’s Thrush records in Massachusetts, it is critical to listen to a singing thrush over several songs and note whether the final parts of the songs are consistently up-slurred or down-slurred. Because the audio recording and description only pertained to a single song and despite the observers’ excellent efforts at documenting this record, the members did not feel that Gray-cheeked had been ruled out with certainty.

The description did not attempt to rule out intergrades with Blue-winged Warbler (Vermivora cyanoptera).

Photos revealed this bird had two whitish wing bars, which is a trait of Blue-winged Warbler.

See the first part of this report for more details.