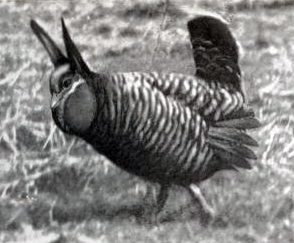 The Heath Hen was a subspecies of the Greater Prairie Chicken that once ranged from New England down to northern Virginia inhabiting sand plains during precolonial time. Once an abundant food source for the early colonists, the species had become decimated by the mid-1800s and by 1870 was extirpated from the mainland. A small remnant population persisted on Martha’s Vineyard for the next few decades before finally going extinct in 1932.